Posted on February 18, 2019 by Working-Class Perspectives 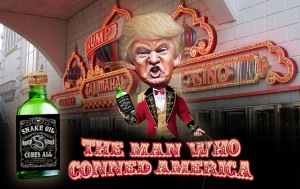 Since the 2016 election, pundits have pondered how a man who began his campaign by gliding down an escalator in a gaudy Manhattan skyscraper festooned with his name managed to ride working-class resentment and anxiety to the presidency. How did a billionaire steal blue-collar Democratic voters right out from under Hillary Clinton’s upturned nose in broad daylight?

The answer will be obvious to anyone who, like me, has spent a career battling consumer fraud: they were conned.

And not for the first time. Trump, like all great con men, knows when a “mark” is ripe to be taken, but we often overlook how these same voters were hoodwinked first by Bill Clinton and then by Barack Obama. Their con games left  blue-collar voters ready to fall.

Really, who could blame them? They voted for Bill Clinton because he promised to reform health care and ban the use of scabs. Instead he passed NAFTA, which destroyed hundreds of thousands of jobs across the industrial Midwest. Clinton also rolled back banking regulation (with a lot of help from his successor George W. Bush), setting the stage for near-collapse of the global economy.

Then came Obama, who promised hope and change and delivered neither for actual workers. To stop the impending meltdown of the economy he funneled hundreds of billions of dollars to banks instead of the working families who were about to lose their homes. He doled out billions more to save General Motors but didn’t force the company to preserve American jobs—a failure that’s playing out with disastrous consequences at Lordstown and other GM plants across the country. And he also failed to keep his promise to streamline the union organizing process.

The policies of the last few decades left a nation littered with the broken dreams of blue-collar and middle-class workers struggling to cope with stagnant wages, home foreclosures, disappearing pensions, and vanishing opportunity. Trump knew instinctively they could be duped.

So he vowed to make America—and them—great again. He promised to rebuild factories in place like Youngstown, punish companies that shipped jobs overseas, revitalize the coal and steel industries, and build a “beautiful wall” to keep out the Mexicans, whom he insisted were responsible for all the problems. That was exactly what so many people in the disaffected heartland wanted to hear. I wasn’t at all surprised that so many of my friends and clients fell for his siren song.

Like NAFTA and the corporate bail-out, Trump’s cons will fundamentally alter the lives of working families for years to come, even if he is defeated in 2020. Like a master pickpocket, he’s distracted his base with meaningless rhetoric about border walls, kneeling football players, transgender soldiers, and socialism, while deftly robbing them blind—and making them feel good about it.

His track record is perversely impressive. He passed a massive tax cut for the rich disguised as a boon for the middle class. He made health care less affordable and available by chipping away at the Affordable Care Act. He started a trade war that is hurting the economy, and he appointed to his Cabinet a team of spectacularly contradictory “leaders”: a treasury secretary whose hedge fund tossed tens of thousands of Americans out of their homes, a secretary of education who loathes public schools, an EPA chief who worked for the coal industry, and a commerce secretary who just couldn’t understand why federal workers who went without pay during the government shutdown were struggling to buy food and pay their rent.

In just the past 30 days, Trump’s actions have gone even further to undermine policies intended to protect consumers. The Justice Department entered into a settlement agreement with General Electric related to predatory lending by the company’s WMC Mortgage subsidiary for $1.5 billion. In the past, the Department required companies not only to pay fines but also to modify borrowers’ loans. Under Trump, not one dollar of the settlement funds will help consumers.

The Consumer Finance Protection Bureau (CFPB) has dramatically reduced its enforcement actions. Under the leadership of Trump appointees Mick Mulvaney and now Kathy Kraniger, who vigorously opposed the agency’s creation as a member of Congress, the CFPB has brought less than one enforcement action for every ten filed by former director Richard Cordray. Recently, the agency levied a whopping one dollar fine against a swindler who was swapping veterans’ pension payments for high interest loans. The CFPB also moved to repeal regulations of the Payday Loan industry that were enacted just two years ago This and other agencies charged with regulating the financial services industry and holding firms that rip off consumers accountable have been systematically staffed with corporate lobbyists and regulatory critics who simply refuse to enforce the rules or the law.

The Trump administration’s all-out assault on regulations and abdication of its responsibility to protect everyday Americans has made consumer protection lawyers the last line of defense for working-class families who are being preyed upon and abused by corporate America. But an insidious provision surreptitiously inserted into the Trump tax cut jeopardizes consumers’ ability to hire their own attorneys to enforce federal and state consumer laws. For the first time, plaintiffs who win a judgment or settlement in a consumer fraud case are much more likely to  be taxed on both the amount of their recovery–usually something that they were entitled to in the first place–and on the fees that are paid to their attorneys for pursuing claims on their behalf.

Trump’s court appointments also threaten the civil justice system, which was designed to level the playing field between the powerful and the powerless. He has been distressingly successful in appointing right-wing, ultra-conservative, corporatist judges to the federal bench, including the Supreme Court. While many who oppose his judicial nominees focus their attention on Roe v. Wade, questions about workers’ rights, the environment, consumer protection, and corporations go unasked and unanswered. As a result, the federal judiciary will be jam packed with judges more than willing to allow corporate America to trample on the rights of the workers.

Trump’s supporters thought they were voting to make America great again Instead, they’ve been bamboozled.  The only question left is will they recognize the scam before the thief skips town?

Marc Dann served as Attorney General of the State of Ohio and now leads the Dann Law Firm, which specializes in protecting consumers from various forms of predatory financing.

This entry was posted in Contributors, Guest Bloggers, Issues, The Working Class and the Economy, Working-Class Politics and tagged Class and economics, Consumer Finance Protection Bureau, Trump and the working class. Bookmark the permalink.

4 Responses to Grifting the Working Class