Iowa’s Next Election: Bridging the Urban-Rural and Class Divide

Posted on July 9, 2018 by Working-Class Perspectives 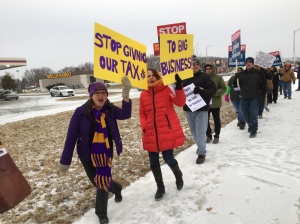 My home state of Iowa famously gave Barack Obama a convincing victory in the Democratic caucuses in 2008, the first triumph that launched a young U.S. senator from Illinois to become the first African-American president. Obama ultimately won two terms, and each time Iowans favored him by considerable margins. Iowa was also one of several Midwestern states that famously flipped to support Donald Trump in 2016.

Hillary Clinton won just six of Iowa’s 99 counties in 2016. Trump won the remaining 93, including 31 counties that had backed Obama in the two previous elections. Nationwide, 206 counties in 34 states voted for Obama in both 2008 and 2012 and then flipped for Trump in 2016. Iowa had more than any other state, with 31 pivot counties out of 99. This makes Iowa a useful microcosm to analyze the nature of Trump’s victory. Did Trump win,  as the New York Times’s Nate Cohn reported, because of  “an enormous wave of support among white working-class voters”? Or were there other factors in play?

Cohn’s claim doesn’t seem to apply for Iowa. Only 17 of Iowa’s 31 pivot counties had higher turnout compared to 2012. In 14, turnout declined.  In addition, most of the increases were small — less than one percentage point. Overall – and this must bring him great angst – Trump won Iowa with fewer statewide votes than Obama had in either of his election victories. So, if there was “an enormous wave of support among white working-class voters,” then the wave was not caused by a mass of new people jumping in the pool. It was more like most of the same people wading from one side of the pool to the other.

But Trump did win support in more working-class rural counties. As in the national election, Clinton did much better than Trump in large metropolitan areas, winning just six counties, all among the state’s most populous. All but one of the pivot counties were rural, with populations of 87,000 or less and not among the top 10 of Iowa’s largest counties. It’s clear that the urban-rural divide was a salient element in the Iowa campaign, a pattern similar to what political scientist Katherine Cramer discovered in the adjacent state of Wisconsin (see  her 2016 book The Politics of Resentment).

The urban-rural divide is also a class divide, reflected in income and education. Iowa’s estimated per capita income in 2016 was $28,872, but per capita income is less than that in 77 counties, and Trump won in 75 of them, 28 of which were pivot counties. Clinton won in four of the six urban Iowa counties with higher per capita income. The pattern is similar for education.  25.7 percent of Iowans have a bachelor’s degree or higher, and only 11 of Iowa’s 99 counties have higher rates of citizens with a bachelor’s degree. Hillary Clinton won five of those counties. Of the 31 pivot counties, 27 have lower rates of higher education. In other words,  Clinton’s only successes in Iowa were in six major metro counties with higher levels of income and education. Trump won every other county in the state.

Considering the urban-rural status, income, and college education rates of the counties that pivoted to Trump in 2016, Cramer’s idea of rural consciousness seems apt, with its “strong identity as a rural resident, resentment toward the cities, and a belief that rural communities are not given their fair share of resources or respect.” Resources and development in Iowa are increasingly unequal, with most affluence located in Iowa’s two large multi-county metropolitan areas. In the center of the state, Polk and Story Counties run along the I-35 corridor, creating a large metro area that stretches from Ames and Iowa State University in the north to Des Moines and its many suburbs in the south. Similarly, in the eastern part of the state, Linn and Johnson Counties along the I-380 corridor form a district that stretches from Cedar Rapids and its suburbs in the north to Iowa City and the University of Iowa in the south. These “corridors” (and they do market themselves that way) are the wealthiest, most populous, and fastest growing regions of the state, with plenty of government-funded institutions and research, headquarters of the largest corporations, excellent hospitals, and the state’s best sports, recreation, and shopping. These are the areas where Clinton won the most support.

Life can be quite different in Iowa’s more rural counties, where population is falling, school districts get consolidated (so towns may no longer have local schools), access to doctors and quality hospitals lags, new investment is rare, and young adults often move to places like Des Moines or Iowa City to find better jobs. Away from the corridors, the lived experience of personal income, higher education, and the long-term hope for opportunity and prosperity for the majority of Iowa’s rural counties is on a much more feeble trajectory.

These areas, where Trump won, were primed to embrace the rhetoric of the Tea Party and Occupy Wall Street movements, which  called for drastic change to the economic status quo. If a very unlikely presidential candidate – one made famous by playing the role of super-successful billionaire in a network reality television show and countless movie cameos – shows up and said says to the “forgotten men and women of our country” that “I AM YOUR VOICE,” residents of these areas might well listen to him, despite (or in some cases because) of his lack of experience and subtle racism and misogyny. Trump went all in on the Tea Party discourse and wore the mantle of change.

In comparison,  Clinton’s words about the economy were vague, spare, and unremarkable. In her victory speech late on the night of the Iowa caucus, she said “I know what we are capable of doing, I know we can create more good-paying jobs and raise incomes for hard-working Americans again.” Although Clinton narrowly won the Democratic nomination in 2016, her message of incremental reforms did not give her resounding victories in Iowa and other important states. On caucus night, Bernie Sanders, the change candidate (like Obama before him) spoke directly to those who felt alienated by politics-as-usual: “What Iowa has begun tonight is a political revolution.” Sanders’s rhetoric might have attracted more of Iowa’s rural voters, but he wasn’t on the general election ballot November.

Of course, rhetoric might win elections, but results matter afterward. So far, Trump’s appointment of Supreme Court justices may thrill conservative Iowans, but his trade war is already hurting Iowa’s agricultural exports, and he continues to undermine other things Iowa voters care about, including health care coverage, funding for education, infrastructure development, and well-paying jobs. Iowa may pivot again in 2018 and 2020. Recent Des Moines Register/Mediacom Iowa Polls have found that Iowans favor Democrats for Congress in 2018, and that 68 percent of Iowans will “definitely vote for another candidate” or consider doing so in the 2020 presidential election. To win back the pivot county voters, Democratic candidates will need to connect with issues to rural voters. It is a message already received by the six Democratic candidates for Iowa governor, who made rural outreach a priority. Democratic Congressional and presidential candidates should take note.

Christopher R. Martin is author of the forthcoming The Invisible Worker: How the News Media Lost Sight of the American Working Class (Cornell University Press). He is professor of Communication Studies and Digital Journalism at the University of Northern Iowa.

6 Responses to Iowa’s Next Election: Bridging the Urban-Rural and Class Divide