Know Your Place: A New Generation of Working-Class Voices 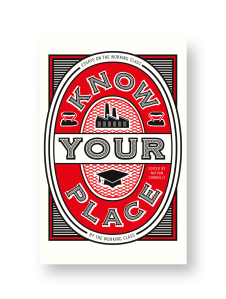 A literary festival isn’t the obvious place to discuss class, but a couple of weeks ago I found myself introducing a session at my local Faversham Literary Festival on a new book called Know Your Place. Edited by Nathan Connolly and subtitled ‘Essays on the Working Class, by the Working Class’, the book brings together twenty-two writers of working-class origin reflecting on aspects of their lives past and present. Know Your Place was a crowd funded response to a call for that voice to be heard after the publication of another collection on race and ethnicity, The Good Immigrant, edited by Nikesh Shukla. The book has received a lot of attention, with reviews and articles in a wide range of media all highlighting the rarity of hearing working-class voices. But even more than that, the book features new, younger voices, often from a mix of ethnicities, and they relate a classed experience quite different from my own and from what we’ve seen in earlier books.

The contributors share a sense of anger about class, the petty vindictiveness of bureaucrats, small but significant injustices. Above all, they rail against the poverty caused by the last decade of austerity. In almost every chapter, the reader is hit by an example of what US sociologists Richard Sennett and Jonathan Cobb long ago described as the ‘hidden injuries of class’, the multiple small ways in which working-class people are taught that their lives are less valuable. Many of the contributors are now successful members of the professional middle classes, yet all still bear the scars of their origin and document powerfully the barriers and hurdles experienced in their varied lives. Know Your Place is refreshing in its clear attempt to represent diverse voices, with attention to  gender and ethnic balance, and it offers new perspectives on what could be well worn themes.

Like all good books, Know Your Place makes you think again about your own life and the experience of class. What struck me most about the collection was how individualised almost all of stories were. The pieces offer very little sense of working-class community, collective help, or organisation.  I noted only one reference to trade unions – through a father’s activity rather than the author’s direct knowledge. Instead, the book presents a group of working-class people facing inequality, and often poverty, on their own. The writers vividly describe the effects of welfare and benefit cuts made over the years, a litany that highlights the erosion of the social welfare world we have lost.

This made me think about the working-class world I grew up in as a school kid, especially as a young worker during the 1980s.  For me being working-class was, and is, something to be proud of, something that infers and confers agency. Looking back now as a sociologist, I can recognise the complex ways in which pride in class was a learnt behaviour embedded, in my case, in the workplace. I don’t remember anyone ever taking me aside and explaining to me how things went on.  Instead I learnt these lessons by seeing and doing, watching the interactions between workers and especially between workers and managers. Now I recognise this as a complex process of desubordination, where the power of managers and supervisors was systematically undermined by the sharp tongues and humour of my co-workers. Intuitively the people I worked with could tread a well-worn fine line between outright rudeness and hilarious banter, and those nominally in charge could do little about it, and they knew it.  Underpinning this relationship was a strong union and equally a sense of entitlement.  Entitlement nowadays comes with a whole lot of negative baggage, but my co-workers knew collectively and individually that they were entitled to things like good and improving conditions of service and the right not to be subject to the arbitrary whim of management. This gave people a sense of confidence, ownership, and above all pride.

The contributors to Know Your Place don’t seem confident in that older definition of entitlement. They have little sense of agency or the ability to resist change or improve their circumstances big and small. I think this reflects a generational shift: many of the contributors to the collection are relatively young, most, I think, in their twenties or thirties. Apart from making me feel old, this generation gap illustrates just how many working-class people now feel isolated. Unlike the men I worked with, who expected their lives to improve, these younger people have only experienced things being taken away or eroded overtime. They don’t have the positive experiences of class, what I describe as the ‘hidden rewards of class’. They have little hope that things could improve or that welfare policies and tax regimes could begin to benefit the less well-off in society.

Know Your Place reminds us of the value of intergenerational dialogue about class and history. Such conversations could help working-class people really know their place as something positive and uplifting. At the end of the session, I asked the audience if they wanted the literary festival to organise another session on class next year and to a person, young and old they all put their hands up. We all need to know our place.

5 Responses to Know Your Place: A New Generation of Working-Class Voices