The Global Working Class Fights Back

Posted on December 17, 2018 by Working-Class Perspectives

2018 has seen many working-class people around the world standing up for their rights and pushing back against injustice and inequality. Some of these fights have made the mainstream news in western countries, but many have not. As we reflect on the year that is ending, let’s not forget the struggles of working-class people and the successes of collective action and solidarity. Around the world, people have had enough of corporate greed and government inaction to combat inequality.

The spectacular scenes of protests and police responses on the streets of Paris were broadcast around the world. Crowds of people dressed in hi-vis vests (gilet jaunes) rallying against the French government have sparked much interest. The left have celebrated the gilets jaunes as a working-class movement – people fed up with austerity and regressive taxes, taking to the streets to demand better treatment and equality from the centrist government (although it should be acknowledged that there has been some coopting of the movement by the far right). In Australia in October, the streets were also awash with hi-vis, worn mostly by construction workers who put tools down to join rallies and marches in the city centers as part of a union-led campaign to ‘change the rules’ and allow workers more rights to organize and strike. 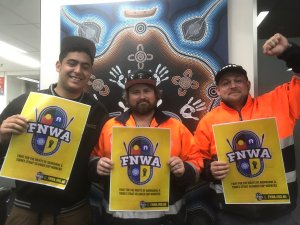 Australia has also seen a number of more localized strikes and organization of workers throughout the year, including the notable formation of the First Nations Workers Alliance (FNWA), set up to fight against the unjust Community Development Program — a ‘work for the dole’ scheme targeting Indigenous people in remote communities. Under the scheme, Indigenous people are expected to work for no pay and are penalized if they refuse to do so. They are not covered by occupational health and safety laws and do not receive other work entitlements. The FNWA has been campaigning around the country, creating solidarity with non-Indigenous workers and unions and empowering workers with information about their rights.

Australia’s neighbor, New Zealand, has experienced industrial action this year by public servants, nurses, fast food workers, bus drivers, and cinema workers. For some worker groups, such as the nurses, the strikes are the first to happen in decades.

In the Asia Pacific region workers at South Korean tech giant Oracle have been striking since May over unfair conditions, rates of pay, and rights to unionize. Across China, workers have challenged the state and risked arrest and imprisonment for organizing in workplaces and going on strike. Factory workers (many of whom are migrant workers from rural areas) are demanding an end to unsafe working conditions and forced overtime. Even in Japan, where strikes are very rare, in one town during a dispute over insecure work, bus drivers engaged in industrial action by refusing to collect fares from passengers. A Philippines branch of business processing outsourcing company Alorica was notified of strike action in September due to the company’s attempts to strip rights from the workers’ union. This will be the first strike of call center employees in the Philippines.

South Asia has also seen a series of strikes this year. Tea plantation workers in eastern India staged a strike in August over pay, and in October, Indian Uber and Ola drivers struck to demand higher fares to meet their cost of living. Pakistani port workers have fought back against unfair dismissals and low wages, and postal worker unions in Pakistan have been protesting employers’ stripping of health benefits.

Various African countries have also seen industrial action in 2018. Nurses in Kenya have threatened to walk off the job if negotiations over pay are not successful, and teachers in Kenya recently called off a planned strike to allow for talks with employers. Members of both private and public sector unions in Nigeria called a national strike in September in their quest for a livable minimum wage. The South African National Union of Mineworkers advised workers at the South Deep gold mine to take industrial action after announcements of mass job losses. The right to strike is entrenched in South Africa’s constitution, but recent amendments to labor laws there will make it more difficult to take strike action. A new national minimum wage has been criticized by the South Africa Federation of Trade Unions (SAFTU) as too low – and likely to be used by employers as a maximum wage. South African workers took to the streets in April to demand a higher minimum, and SAFTU has pledged to maintain the pressure on the government with more protests in 2019.

Workers in Middle Eastern countries have also been downing tools. In the United Arab Emirates, where strikes are technically illegal, construction workers in Abu Dhabi refused to work until they were paid wages owed. In Iran, steel workers striking over unpaid wages and other issues have faced arrest, and Iranian truck drivers, farmers and railway workers have also staged action in 2018.

Employees in Europe have been fighting against Amazon – choosing the busiest days of the year to stage strikes and speaking out publicly against unsafe working conditions in Amazon factories. Greek workers have been protesting against government plans to restrict industrial action, and German railway workers have been engaged in a national strike over pay. In the UK, cleaners at the London School of Economics finally won their fight to become in-house staff, vastly improving their pay and conditions. This was the result of a ten-month strike led by some of the most marginalized workers in the country. Their union, United Voices of the World, has also run successful unfair dismissal campaigns against retailer Top Shop and a London recycling plant. They also scored a win for cleaners working for a London council in their fight to receive the London Living Wage.

There are many, many inspiring stories of successes and of continuing struggles. Campaigns have been varied as workers have fought for decent pay and conditions, as well as job security, the right to unionize, work safety, and to not be harassed at work (as in McDonald’s worker walk outs in the US). Working-class people are taking action to improve their own lives and to challenge structures that maintain inequality and injustice, and hearing about the actions and success of others helps build workers movements. Stories from around the world show there is still power in unions and collective action. They also highlight the need for global solidarity.

In this season, let’s not forget the many around the world whose work continues throughout the holidays, and let us keep organizing, representing, supporting, and celebrating working-class lives in 2019. Solidarity forever!