Posted on November 5, 2018 by Working-Class Perspectives 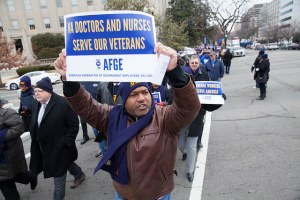 Most American workers who get injured on the job or develop an occupational disease soon become familiar with the inadequacies and injustices of our fifty state system of workers’ comp. Private employers fight their claims. Rehabilitation services are fragmented and managed by private insurers. If they’re unable to work and lose their original job-based health coverage, even workers who’ve been  approved for treatment for specific work-related injuries or illnesses can’t pay their other medical bills. .

The situation is very different for the nine million men and women who qualify for medical benefits from the Veterans Health Administration (VHA). The VHA—much under attack these days by President Trump and Republicans in Congress–functions as a federal workers’ comp system for former members of the military with service-related ailments. While vets’ medical problems are not always recognized as quickly as they should be, once a vet is in the VHA system, any single malady of the mind or body makes them eligible for any other kind of treatment they need in the future–from hip replacements to cancer surgery or hospice care.

Eligible veterans end up on an island of socialized medicine within our larger for-profit healthcare industry. Like residents of the UK covered by the National Health Service, VHA patients gain access to an integrated network of public hospitals and clinics, employing doctors, nurses, and therapists who are salaried not paid on a “fee for service” basis. About a third of the VHA’s 300,000 staff members are veterans themselves, which helps create a unique culture of solidarity between patients and providers that has no counter-part in U.S. private sector medicine.

The VHA has a predominantly poor and working-class patient population because that’s who enlists in our professional armed forces these days. But military work also exposes non-combat veterans to injuries or illnesses like those suffered by millions of civilians in blue-collar jobs. As Rick Weidman from Vietnam Veterans of America explains, “the military is a collection of very dangerous occupations.”

For example, the most common complaint of VHA patients is hearing loss and tinnitus. That’s because almost every branch of the military exposes enlisted men and women to high levels of noise. In the Air Force and Navy, there’s the constant roar of jet engines. In the Navy, there’s the metallic clanking that rebounds through the echo chamber of a submarine or other naval vessel. You don’t have to deployed to the Middle East to be deafened by explosions from improvised explosive devices (IED’s) or the U.S. military’s own ordinance. Just going through basic training can be enough to insure diminished hearing capacity later in life. Similarly, infantry training leads to musculoskeletal problems because it involves hauling around 60- to 100-pound packs that place an excessive burden on necks, shoulders, knees, backs and ankles.

Veterans also bring signature issues from particular eras. In Vietnam, draftees and enlisted men were exposed to Agent Orange. Other Cold-war era soldiers and sailors found themselves involved in chemical warfare agent experiments, nuclear weapons testing, and base cleanups with little personal protection. Troops sent to liberate Kuwait came back with symptoms of “Gulf War Syndrome.” Veterans of multiple tours of duty in Iraq and Afghanistan were often exposed to lung damaging and cancer causing toxic burn pits. Insurgent use of IEDs in those two countries has led the VHA to become a leading center of research on and treatment of traumatic brain injuries suffered by thousands of troops (and professional football players as well, who now arrange to have their brains sent to the VHA for post-mortem verification of their condition).

Combat veterans often suffer from mental health issues, like PTSD. In researching a new book called Wounds of War, I spoke with men in their eighties or nineties whose searing memories of death and destruction in Germany, Japan, or Korea still disturbed their sleep at night. Veterans who suffer from mental and behavioral health problems—whether acquired in or exacerbated by military service— are more prone to substance abuse, particularly opioid use if chronic pain is involved. They also become a bigger suicide risk. An estimated 20 veterans a day kill themselves, although three-quarters of those have never been to the VHA for treatment. Between 2006 and 2015, the number of veterans receiving specialized mental health care at the VHA rose from 900,000 annually to 1.6 million, a reflection of continuing collateral damage from open-ended foreign wars.

VHA caregivers are trained to identify and treat these very specific wounds of war.  Every VHA employee gets training in how to better recognize and assist patients who are suicidal. Thousands of VHA mental health providers are taught the latest evidence-based treatments for PTSD. (Outside the VHA, only 30% of private sector providers use such treatments).  And primary care providers and specialists alike recognize the kind of diseases produced by toxic exposures, such as Agent Orange related diabetes or burn-pit created respiratory problems.

The VHA ranks with Kaiser Permanente as one of the most heavily unionized health care systems in the country; the American Federation of Government Employees, National Nurses United, and the Service Employees International Union have more than 120,000 members serving veterans. Thanks to this union role, management pays more attention to the kinds of occupational hazards that are rampant in health care work generally, particularly in non-union hospitals. The VHA was the first – and may be one of the only U.S. healthcare systems – to install the kind of lift equipment that helps nursing staff avoid debilitating and often career ending back, neck and shoulder injuries.

Due to the mental health problems of some of its patients, the VHA goes to great lengths to insure a safe workplace for health care providers. In Northern California, VHA staff labor under the shadow of what happened at The Pathway Home, a private not-for-profit program housed at a state run veterans’ facility in Yountville, last March. Three professional caregivers – one a current and another a former VHA employee –were shot and killed by a vet who then committed suicide.

The VHA is far from perfect. As even its defenders note, veterans’ health care could be far more comprehensive and effective than it is. Unfortunately, both Congress and recent presidents have made it harder for VHA to care for veterans. Congress has allowed the Department of Defense to give hundreds of thousands of veterans other than honorable discharges, making them ineligible for VHA care. In some cases, soldiers have been discharged for active duty misconduct related to PTSD or brain injuries – yet they have a particular need for coverage.  Congress has also consistently underfunded and understaffed the Veterans Benefit Administration (VBA). This is the separate agency that determines whether a veteran has actually suffered from an occupational illness or injury—and to what degree of disability.  As a result, there are far too many eligibility determination delays before veterans become VHA patients.

Under the Trump administration, the VHA faces even greater challenges. Earlier this year, Congress – with the support of a majority of Democrats — passed the VA MISSION Act, which  will siphon billions of dollars away from the VHA’s budget and direct that money toward private doctors and hospitals that are often ill-prepared to treat veterans.  As the VHA is starved of needed funding, health care providers will be laid off (there are already an estimated 49,000 existing staff vacancies) and facilities will close. That will undermine the quality of patient care, and Republicans (with support from the Koch-funded Concerned Veterans for America) and their Democratic Party enablers will use that to make the case for total privatization of the system.  Their aim is to starve the system so that care and services will decline even more. Those who oppose Medicare for All would then use the VHA as a poster child for the “failure” of single payer models, instead of a shining example of how they work better.

Fortunately, members of veterans’ organizations, union-represented VHA staff, and community allies around the country are fighting vigorously against VHA privatization. And given voters’ concerns about health care, Democrats could use the threat to the VHA as a “wedge issue” against the right wing. If more Democrats would embrace this cause, they might actually win back voters from military families who believed that Trump would defend veterans and their health care.  The fight to save the VHA from the profiteers will help protect a model of healthcare from which all Americans benefit.

Suzanne Gordon co-authored a 2017 report on veterans’ health care for the American Legion called “A System Worth Saving.”  She is the author, most recently, of Wounds of War: How The VA Delivers Health Healing, and Hope to the Nation’s Veterans, from Cornell University Press. She will be speaking about the book around the country over the next month. She is also a Senior Policy Analyst at the Veterans Healthcare Policy Institute. She can be reached at sg@suzannegordon.com.