Food Insecurity and the Costs of College

Posted on November 13, 2017 by Working-Class Perspectives 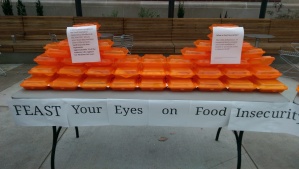 Today, more than 500 colleges and universities belong to the College and University Food Bank Alliance (CUFBA).  When I spoke at the annual Food Pantry Conference, hosted by U-Michigan-Dearborn this year, I met an amazing group of people from a diverse group of colleges (two-year, four-year, commuter, residential) around the region who were dedicated to ensuring that students on their campuses had enough food to eat.

Think about that for a minute.  Nothing highlights the gap between perception of college as a place of pampered privilege and the reality of college so much as the growth of campus food pantries  — from two in 1993 to around 300 in 2016 to more than 500 today, clear evidence of rampant food insecurity among college students.  According to a recent report by Sara Goldrick-Rab and her team, about two-thirds of college students are not getting enough food to eat.

For the past 35 years or so, since the 1980s, those of us who study education and inequality, especially at the college level, have focused our attention on the cultural obstacles to success for LIFGWC (low-income, first-generation, working-class) students.  Without an experience of college attendance in the family, these students struggle to learn the ropes.  They either don’t fit in or, just as bad, they don’t feel like they fit in.  They are — choose your favorite expression here — fish out of water, strangers in paradise, impostors.  They don’t always want to fit in, either, if that means leaving their families behind.  They are missing the social capital of their more privileged peers, don’t know how to negotiate with their professors, don’t have the family connections to get into a fraternity or sorority which can expand their networks for post-college life.  They participate less in the extracurriculum, not understanding how its use for making connections, building resumes, and marking one as “the right type” for later jobs or graduate school.  And when they do recognize themselves as having a different experience than the majority of their peers, they struggle to connect with others like them, often embarrassed to name the difference as class.  And when it comes right down to it, many working-class college students find all this too much to bear, and end up leaving college at much higher rates than their peers. 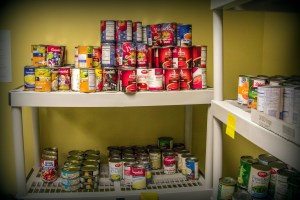 The food bank at the University of Michigan

Attending the food pantry conference made me reconsider things, however.  With the return of a Gilded Age, I think our focus on cultural obstacles has led us to miss the renewed importance of the material.  To use Bourdieu’s phrase, we have “put the stick in it” too far in one direction, and it is time to move the stick back.  Of course, money is not everything, as our collective research of the past few decades have shown, but it is a lot.  I’m reminded of a study suggesting that money doesn’t buy happiness after a certain level, but the absence of money necessary for a basic existence does lead to a host of illnesses, depression, and, yes, unhappiness.

In 1950, one could attend a state flagship university, for all four years, for less than the cost of a used car.  The tuition of an Ivy League university such as Penn was $600 per year, less than one-quarter the average salary of a full-time worker in the US at the time ($3,210).

Debt has turned out to be a great divider.  In the past few years, about 60% of bachelor’s degree recipients graduated with debt, an average of $28,400 in 2016.  I suspect that we have not yet fully realized the impact indebtedness is having on those students, because many students graduate debt-free with the aid of class resources – financial assistance from parents and savings accounts set up by family members. For those graduating with debt, the burden can affect everything from the jobs they take to whether they go on to graduate school, get married, buy a house, or have children.  And things are even worse for the thousands of students who leave college without a degree but still burdened by debt.

So, let’s face it.  College is expensive, and it is getting more so.  The loss of public funding and the rise of inequality have worked together to create a situation where a regional conference on food pantries on campus has become necessary.

As Goldrick-Rab’s team reports, more than half of first-generation college students are “food insecure.”  About two-thirds of these students also experience housing insecurity, with fifteen percent reporting that they have been homeless at some point during college.  Half also reported not being able to buy required textbooks.  A quarter dropped a class because of scheduling conflicts with jobs or other expenses.   In human terms, that is a lot of “unhappiness” of the kind that could be solved by more money.  We are talking about tens of thousands of young adults who are trying to make their way through a system that they have been told is absolutely necessary if they want secure and stable jobs in their lifetime. It’s a little too much like the Hunger Games, no pun intended.

What’s the solution?  First, public education should be free.  That’s necessary for a democracy to function properly.  In addition, every person should have access to a basic income, one that provides healthy food and secure lodging.  That so many of our young people (and there are plenty of older adults in this boat as well) must choose between education and food, or education and shelter, or food and shelter while they attend classes is barbaric.  So, too, is the tradeoff many must make between access to education and future financial solvency.  Going to college for far too many means putting a millstone around their necks for their entire future lives.  Asking anyone, let alone eighteen and nineteen-year olds, to willingly choose this debt for life is absurdly cruel.

We can do better.  We have done better. In the years following WWII, we doubled, then tripled, the numbers of students we admitted to our universities.  In 1975, states paid most of the costs of public higher education (60%) while students paid about one-third.  Today, the situation is reversed, with students paying most of the costs of public higher education through tuition, largely financed by loans, while states pay less than one-third.  Recent proposals would readjust the balance, making (public) college affordable – and largely free — for all.  Those who benefited by our past commitment to public education need to step up and demand that the bargain made in the “age of abundance” — those affluent years following WWII when we taxed the rich and built an enviable public infrastructure – must continue, even if this means rejecting some tax breaks thrown our way now and then.

Allison L. Hurst is an Associate Professor of Sociology at Oregon State University and the author of two books on the experiences and identity reformations of working-class college students, The Burden of Academic Success: Loyalists, Renegades, and Double Agents (2010) and College and the Working Class (2012).  She was one of the founders of the Association of Working-Class Academics, an organization composed of college faculty and staff who were the first in their families to graduate from college, for which she also served as president from 2008 to 2014.

1 Response to Food Insecurity and the Costs of College